‘The heat is on agriculture and food production in the tropics. With the global population expected to reach 9.8 billion by 2050, the greatest pressure will be experienced in the world’s tropical zone – home to half the world’s population.’

This message set the tone for over 800 delegates from 43 different countries who attended the third TropAg conference held at the Brisbane Convention & Exhibition Centre (BCEC) in November 2019.

The conference was the brainchild of Professor Robert Henry and his team from UQ’s Queensland Alliance for Agriculture and Food Innovation who developed the conference in conjunction with the BCEC’s international conventions team.

Held biannually, the first conference was held in 2015, again in 2017 and most recently in November 2019.  A significant factor in the success of the TropAg conference series is that The University of Queensland is a world leader in agriculture and food research.

With the theme ‘Shaping the science of tomorrow’ the conference took a broad-brush approach with 240 symposia sessions covering five themes including Crops, Horticulture, Animal, Nutrition and Food and an AgFutures stream showcasing innovation and investment in Queensland Agriculture.

Professor Henry says Australia and particularly Queensland have a unique place in the world when it comes to agriculture. “We are one of the very few developed countries in the world in a tropical environment. Our geographic location gives us an advantage and puts at the forefront of research. We have the capability, the expertise and the investment.”

“In an academic sense and scientifically, Queensland leads the way in agriculture. We are right up there with the best and we have a strong reputation internationally.”

“We are dealing with a crux of issues including population growth, an increase in per capita food consumption associated with growing affluence, scarcity of resources, and impacts of climate and environmental disruptions,” he says.

The Professor believes that the current debate around climate change and the insecurity of the world’s food supply has prompted greater investment in agriculture in Australia.  “We are seeing more interest in investment in agriculture across the board. In 50 years’ time, people will still be eating and the world’s population will still be growing.”

TropAg conference organisers say the strength of Queensland science and a stellar line-up of what Professor Henry describes as inspirational keynote speakers, contributed to the success of the conference. Delegate feedback attested that TropAg was an ‘excellent conference with great presentations and opportunities for networking.’

One of the major highlights was the Gala Dinner continuing the conference theme with an all Queensland menu created by BCEC Executive Chef, David Pugh.

David Pugh, a celebrated Australian Chef known for his advocacy and support of local produce, was named as an ‘#eatqld Champion’ at the dinner by Queensland Minister for Agricultural Industry Development and Fisheries Mark Furner.

Professor Henry expects the International Tropical Agriculture Conference to continue for many years to come, attracting increasing numbers of delegates from around the world and he has not ruled out the conference moving to the annual rotation.

“Brisbane,” he says, “is the logical place to hold the conference and the international reputation of the meeting is growing. The BCEC team is crucial to the success of this event. The venue is convenient, flexible and the conference can grow with the venue.”

The next TropAg conference will be held in Brisbane from 8-10 November 2021. 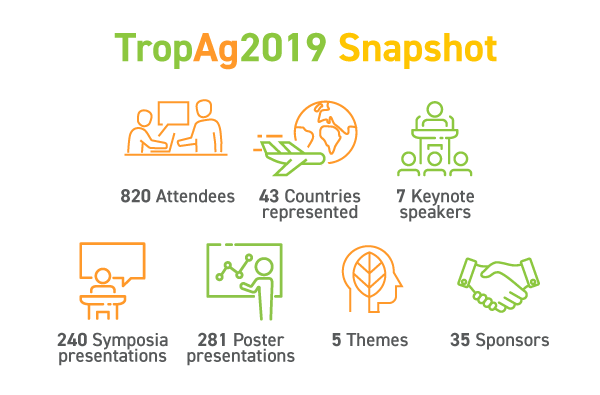 The Department of Agriculture and Fisheries host an AgFutures symposia and keynote presentations during the TropAg conference. Queensland producers have a worldwide reputation for producing high quality, clean and green produce in harsh environments in tropical and sub-tropical climates and the AgFutures theme showcases the state’s latest technology and innovations in digital and data platforms, robotics, satellites and biotechnologies. Theme topics include industry-wide investment required for innovations, emerging trends, business opportunities and capital models from farm gate to agribusiness, agri-tech, processing and research. This theme is recommended for representatives from the agriculture and food sectors, including growers, producers, researchers, policy makers, and agribusiness.

Organisations are encouraged to arrange meetings around the TropAg conference to capitalise on the range of delegates and experts attending the conference.  During the last TropAg conference some events held included a Researchers in Agriculture for International Development (RAID) Early and Mid-Career Trivia Event as well as a Workshop on plant cryobiotechnology and numerous social gatherings. View TropAg2019 Week events

Around 820 delegates from 43 countries attended the last TropAg (in 2019) to engage with Queensland researchers, share scientific success stories and discuss ways to address future challenges in the tropics.

Subscribe to TropAg news to receive the latest news about the TropAg conference, media releases and program announcements.